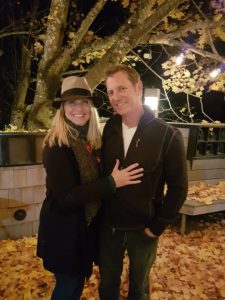 Doug was born in Southern California where he met and married his lovely wife, Kaycee. They have three incredible, “adult-children” Wade, Judah and Juliana.

They moved to Idaho in 2003 after serving Living Hope Fellowship in Colorado for over 10 years. While their move to Idaho was precipitated by a sense of call to do mission work/church planting in BC early in 2000, it was unclear about when, where and why. But they moved anyway! Having got as close to BC as they dared, they settled into regular jobs in Sandpoint, Idaho

After several failed attempts to get into BC for several years, Doug was asked to become the pastor of a village church in Elbow, SK in 2013. When asked, “Why did you go to Elbow, SK when BC had been on the radar for so long?” Doug and Kaycee simply believed and maintain “that what we thought looked like plan ‘B’ for ministry in SK, turned out to be God’s plan ‘A’ at Bethel Lutheran Church in the Village of Elbow.”

Late in 2017, the Lutz’s returned to Idaho for health reasons and were determined to be the hands and feet of Jesus in whatever capacity He chose. Soon after their return to the states, they were contacted by East Kootenay Lutheran Parish in BC. The rest is history in the making. On April 2nd they arrived in Cranbrook and are now serving in five locations along the East Kootenay corridor.

Doug and Kaycee love working together in ministry and long to see people of all ages connected to God as disciples of Jesus. This has been a catalyst for both of them choosing early on to become life-learners on their way to becoming more like Christ in ministry together. It is their hope to take as many people cross-generationally as possible along with them on God’s Kingdom Road. It is their passion to help “teach others to teach others” the character of Jesus in order to live out the good news of God’s kingdom in real and life-giving ways.

Although both appreciate the outdoors hiking, biking, fishing, and gardening, a fun day for Doug and Kaycee can be as simple as a hot cup of coffee in front of the fireplace, hanging out alone, or with friends.